I’ve been working on an environment for a while now since I finished the Resonator at the end of February. However I’m considering diverting my attention to something smaller for a month or so, so now would be as good a time as any to go over my progress so far.

Admittedly I did write an entry on this project a couple of months back in its entirety but I decided to scrap it because it was just a bit rubbish. So surprise! I haven’t been slacking off after all!

With this project I wanted to create some kind of containment facility for an exotic or dangerous creature. The driving image I wanted to work towards was that of the view out the angular window. The architecture of the lab would be clean and light, with a simple modern or near future theme so as not to distract from the focal point of the scene.

The ultimate goal of the project was, of course, to potentially be able to replace my Offworld Safehouse FMP in my portfolio, which looked good from a distance but was sorely lacking in showing off my technical skills in almost every regard. This level was going to feature modular building elements and an area of greenery, which would be kept on a small scale so I could really focus on the little details. 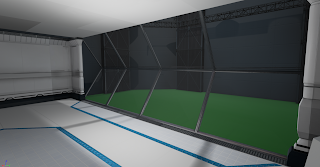 The start of the project was very slow due to not having produced modular assets before, resulting in a somewhat trial-and-error approach to texture efficiency. Once I understood the importance of modular textures over modular meshes things started moving much faster. It’s tempting to go back and re-bake some of my maps differently as there are still some issues but that would probably be a poor use of my time. As for the greenery I still had some problems and I’m still not 100% satisfied with the assets I’ve made so far but with the help of the new foliage material settings in UE4 things are looking far better than in my FMP. 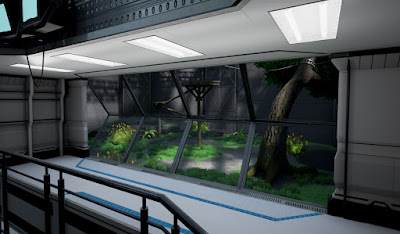 At the stage I am at now, most parts of the build have been touched upon but aren’t quite there yet. I haven’t properly worked on the enclosure facing/outer walls of the lab at all, so they will likely be the next aspect I concentrate on. I’m also quite concerned about the emptiness of the lab room so I need to think up some props to populate more and also to sell the “story” better, as I think my theme still comes across as quite vague and not immediately obvious. 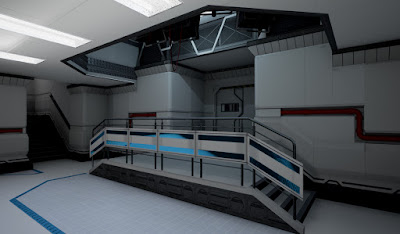 Ultimately this project still needs a lot of work, but I think it’s a good idea to take a brief rest and work on something a little different. After working solo on one thing for an extended period of time without access to immediate feedback like at university it starts to become increasingly more difficult to tell what looks good or not, a fresher perspective would definitely be nice. Plus, my self-imposed “deadline” for getting my portfolio up to scratch is still Industry Workshops in August, and I wanted to get more than one piece done by that time. Focusing on the smaller idea to get it out of the way first doesn’t seem like a bad idea to me.

The “mini project” I’m considering taking on would be to compensate for the remaining shortcomings of my portfolio. I need to include something that is more grounded, less futuristic or fantastical. Possibly something historical to balance things out. But I’ll be keeping it on a very small scale regardless, and focusing on individual assets rather than just the finished composition.

As for the specifics, my current best idea is to make an ornamental fireplace, something that is interesting enough to stand on its own but would also make a great hero asset in a small scene. That way I could call the project “done” but easily be able to return to and expand on it later. It should be pretty fun.
Posted by Rebecca Clay at 16:04